As what was supposed to be an historic social policy milestone is missed, a new Deltapoll survey prompts fears that supposedly-binding carbon targets could go the same way

Twenty years ago, as these infographics highlight, the British government vowed to end child poverty by 2020. That promise was put into law ten years ago, specifically setting targets for the financial year that starts this week. Those targets were removed four years ago. Official statistics say at least one in 10 children are in “low income and material deprivation” and that one in three children are poor by other measures.

Deltapoll presented much of that information to a representative sample of 1,545 adults in Britain between 13th and 16th March this year. Respondents were then asked, “Which of the following do you think should be the government’s approach to dealing with child poverty?” and gave the following answers. 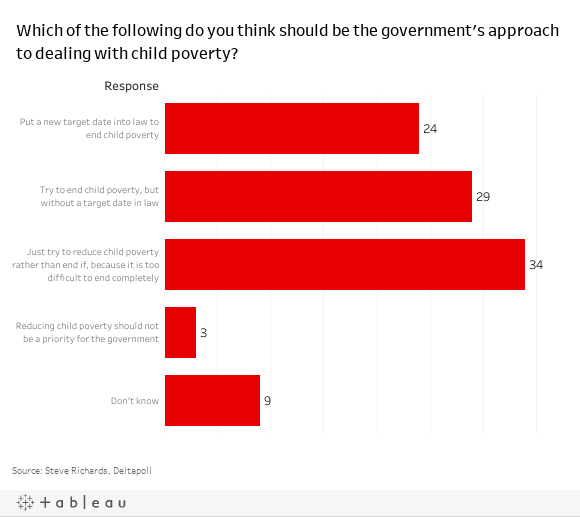 Even though the Covid-19 crisis was tightening its grip as the survey was conducted, the vast majority still thought child poverty was important, with only 3 per cent suggesting that its reduction should not be a priority.

However, people are divided on what they think can be done: one third think we should “just try to reduce child poverty rather than end it, because it is too difficult to end completely.”

Unsurprisingly, reinstating a target set by the Blair and Brown governments is more popular among Labour voters (32 per cent) than among Conservative voters (22 per cent).

But that difference is not large, perhaps reflecting the cross-party support for the target back at the time, when the young David Cameron, then in “modernising” mode, embraced it. In 2009, before the child poverty target became law, the British Social Attitudes survey found that some 82 per cent thought that child poverty reduction was “very important” and 79 per cent thought…

When you register we’ll also send you a free e-book—Prospect’s Top Thinkers 2020—which salutes the scientists, philosophers and writers reshaping our times. We’ll also send you our weekly newsletter with the best new ideas in politics, economics, history, science, literature and the arts. You can, of course, unsubscribe from this newsletter at any time.

The free schools meal fiasco reveals the Tory Party's greatest weakness
Rachel Sylvester / October 22, 2020
Ministers claim there is “no money” for another extension to free school meals in...

Free school meals: Behind the long-term effects of child hunger
Regina Keith / October 26, 2020
Hunger, mental health issues, and susceptibility to chronic illnesses are just some of...
Share with friends

When Britain voted to leave the EU, the country seemed on course for a soft Brexit. So how, ask Jill Rutter and Anand Menon, did we come to the brink of a hard departure? Sam Tanenhaus looks at the final days of Trump, while Ngaire Woods examines Biden's in-tray. Plus: Philip Collins on who's to blame for Boris Johnson, and the latest on the search for a vaccine

Why do so many teenage girls want to change gender?

The endgame for Johnson could come sooner than you think

Face it, one-nation Tories: the party’s over

What Labour's antisemitism crisis tells us about Britain

Trump's contempt for how government works has rarely been so stark

Local elections: the key numbers crunched
May 4, 2018
Speed Data: Why the Remain vote swung sharply—while Leave voters stayed put
June 20, 2017
Why the Tories are so keen to frame Brexit as a battle
May 30, 2017