Sorry We Missed You mirrors what our own research told us about the gig economy. Photo: Entertainment One

Ken Loach’s film, Sorry We Missed You, tells the harrowing tale of Ricky, Abby and their family’s attempts to get by in a precarious world of low paid jobs and the so-called “gig economy.”

But how realistic is it? Can Loach’s film be accused of undue pessimism? After all, UK government ministers have applauded the gig economy and the freedom and flexibility of being an “everyday entrepreneur.”

A new study by myself and employment expert Andreas Giazitzoglu investigates what we know about the gig economy, in order to get a clearer picture of what is really going on in the contemporary world of work in the UK.

Narrowly conceived, the gig economy means workers (as independent contractors) doing discrete, short-term tasks—or “gigs”—for companies via digital platforms such as Deliveroo, Amazon or Uber. As one study describes them, these are “labour contracts that are as temporary as is possible for them to be.”

We argue that it is better to see the gig economy as part of a wider shift towards insecure forms of work. Long-term unemployment is no longer a serious social policy problem, but standard, full time, long-term employment is also much less common. 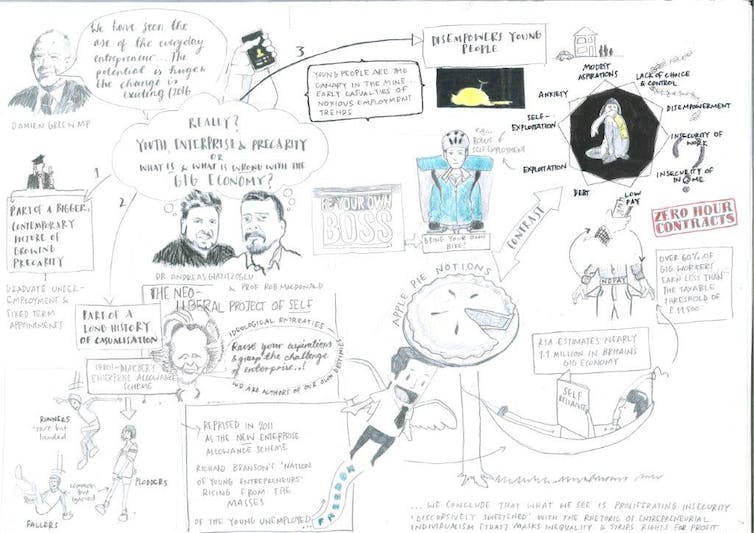 Our study in illustrated form, by Dr Cheryl Reynolds, University of Huddersfield.

More and more people are churning from “one shit job to another shit job,” as Ricky puts it in Loach’s film, punctuated with periods of unemployment. And as Loach observed (in a Q&A session following a preview), Sorry We Missed You is a sequel to the 2016 film I, Daniel Blake, which explores the degradations of the UK’s benefits system.

These are two sides of the same coin, as research on “the low-pay, no-pay cycle” has shown. Many of these jobs are on zero-hours contracts, which although illegal across much of the EU, have boomed in the UK.

Employers insist that workers want this “flexibility.” But two-thirds would prefer a fixed-hours contract.

Not only will a trade deal with Europe take a long time—it should
David Henig / November 26, 2019
It takes years to work out what is most important and how to achieve it in international...

Would a Corbyn minority government mean two further referendums?
Kirsty Hughes / November 26, 2019
Votes on EU membership and Scottish independence would be more likely but far from...
Share with friends

Medusa was punished for being raped—so why do we still depict her as a monster?

The epidemiology of misinformation

What the history of rhyming dictionaries reveals about literary snobbery

Robert MacDonald
More by this author